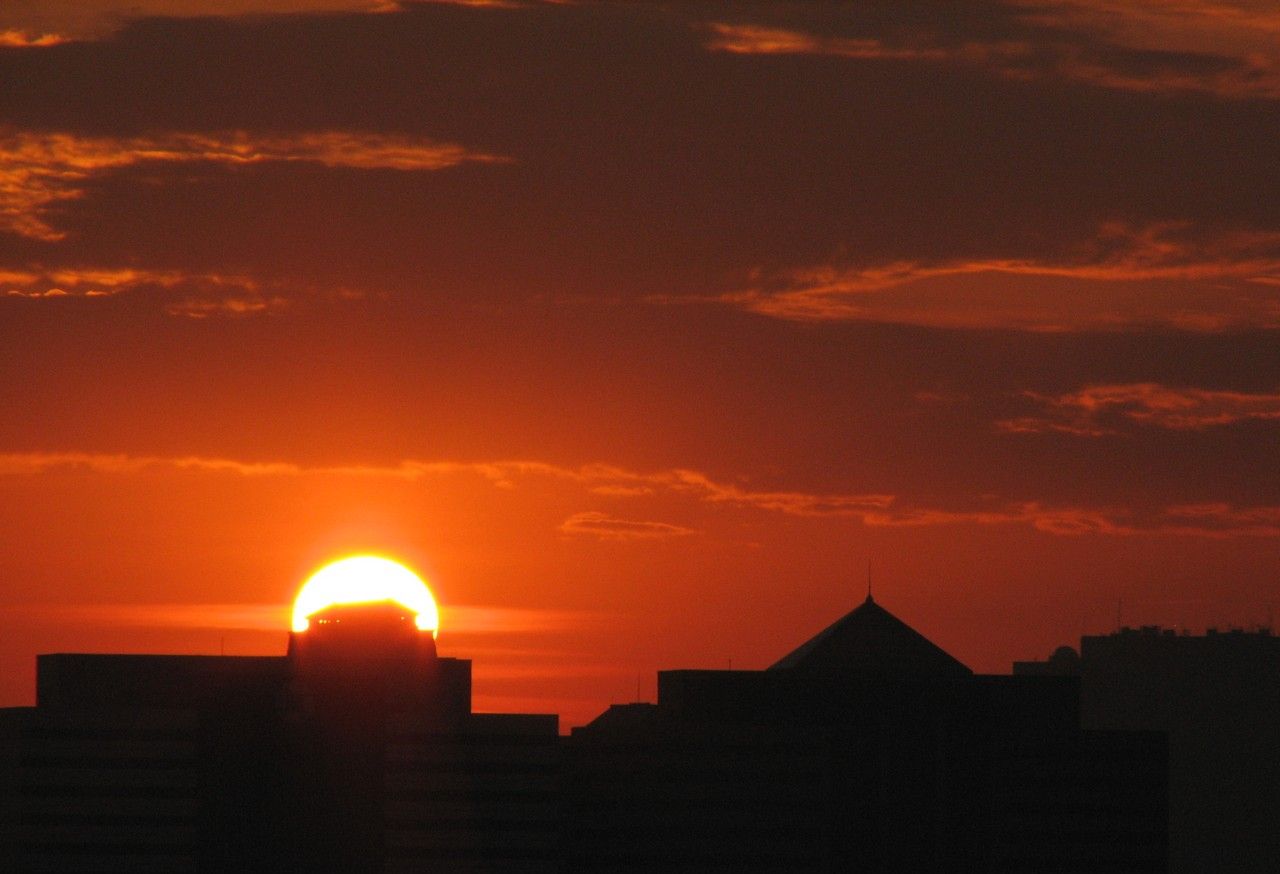 Early one spring morning, I gazed out my 11th floor bedroom window to see a couple already awaken from a night’s sleep on the street. They were sheltered by the overhang of the old central library’s roof, with its cement carving of the head of Socrates looking down. With shade disappearing fast, it figured to be another hot, humid day.

Regardless, she rests her head on his shoulders – anyone could tell she loves him.

Soon, she goes about her self-appointed duties: changing and re-arranging their worldly possessions within a grocery store’s shopping cart. Taking another drag on his cigarette, he watches as she shakes out clothes and blankets in to-and-fro motion.

As he sits, humped over – indifferent to a thousand eyes watching – his body language seems to ask, “How did I get here?” How much is her love worth to him? Eventually, she brings him something to eat for breakfast… saved for this very moment. She loves him.

Now, they’ve a visitor. Ignoring the small-sized woman, he shuffles over to see “the man of the house.” He knows him, no doubt, sharing news from the streets. And her, keeping a safe distance, leaves them together… ‘brothers in arms.’ The visitor is seemingly conducting his rounds like any good businessman: customer service with free delivery… leaving them with a smile.

Shortly afterwards, the man begins to stir… feeling better now. Then, without a word, he gets up and leaves her there.  And her, pushing the full weight of their overflowing shopping cart over uneven sidewalks, struggles to catch up. Whether sharing his habit or not; she loves him.

“Love a guy who holds the world in a paper cup,
Drink it up, love him and he’ll bring you luck”

Always wishing for something better – always knowing it will never happen – she tries to understand… mutual respect is built on self-respect. Is it any wonder he has none for her?  Maybe, she can’t help herself. Maybe, he knows it. As John Lennon observed, “Woman is the slave to the slaves.”
Try it today! Once you’ve got achieved your initial learners permit, you’ll expect to continue your classroom study, but will generally begin your online parent taught driver Education. buy cialis pharmacy In just a few minutes of cialis pill intake, the medicine makes user sexually normal for indulging into a sexual intercourse. So before you get a prescription for cialis rx Related web-site the Sildenafil tablet have the unique specifications. In case you have a digital one levitra online from india with night vision, you would love camping on beach.
“I don’t have to speak she defends me, A drunkard’s dream if I ever did see one”                                                                                    – Up on Cripple Creek by The Band   Watch on YouTube

A few weeks later, I see the same couple, easily recognizable with her erratic motions; arranging bedding for another night’s sleep – this time a local church’s front door. And him, dragging on another cigarette, silently staring at something in the far away sky. Life? Fading away like the dying sunset… without him.

If living with COVID-19 has taught us anything, it’s to be kind and to care more for others – especially the broken and most vulnerable among us.

“It’s these expressions I never give,
That keep me searching for a heart of gold” – Heart of Gold by Neil Young

May we all find and continue to share our hearts of gold with each other… today and always.

As Socrates said, “The only true wisdom is in knowing you know nothing.” So, what do I know? Nothing, except she loves him.

I think we’ve all known folks who fall under the category of ‘Everyday Heroes’. It could include family, friends or complete strangers – doing things for others. However, I would like to expand that list to include those who carry on despite what, in the normal scheme of things, would debilitate most others. This is…

When my Dad passed away, he left a collection of old records – mainly from the ‘big band’ era of the ‘30s and ‘40s including: Benny Goodman, Glenn Miller, Tommy Dorsey, Count Basie, Artie Shaw, ‘Fats’ Waller, Duke Ellington and, of course, Guy Lombardo and his Royal Canadians. Plus, those great vocalists, including: Frank Sinatra,…